making pictures : three for a dime

photographs by the massengill family 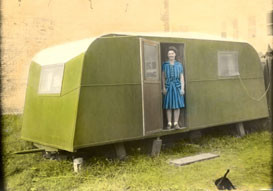 One Saturday morning in the mid-1930s, Mancy Massengill, a wife and mother of two, saw people having their pictures made in a dime store photo booth in Batesville, Arkansas. According to her son Lance, “she watched close, and got the name off the camera, then wrote to the company and ordered the lens. She got the money for that by taking about two‐dozen pullets in for sale.” Her husband, Jim, built a box to house the lens and outfitted a trailer to create a mobile photo studio. On weekends, they would set up in little towns across the state and make pictures, three for a dime.

Jim and Mancy Massengill started this family side-business to make ends meet. The country was in the throes of depression and on the verge of entering the Second World War. Work was scarce in rural Arkansas, but the Massengills understood that even in rough times, life continues. Babies are born, children play, couples meet, and we all grow older. Someone needed to be there to capture those moments and that person could perhaps make a living doing it.

A few years later, the Massengill’s sons, Lance and Lawrence, and their wives, Evelyn and Thelma, worked their way into the business. They outfitted their own trailers and made their own pictures, traveling across the state in search of clients. The surviving family diaries and notes from this period attest to a very strong and entrepreneurial work ethic, with little mention of aesthetics or technique. The men and women of both generations describe where they went, what they did, and how much they made with only fleeting mention of life’s details. With few exceptions, the stories are left to be told by the pictures they made.

The Massengill family photographs can be playful, serious, strange, and at times, haunting. Originally created as precious souvenirs, these photographs recorded moments experienced by the very young, the very old, and everyone in between. Viewed today, the images provide us with honest and intimate portraits of life in the rural South in a bygone era. The photographs collected in this book were all created by members of the Massengill’s extended family in the 1930s and 40s, but the individual photographers remain, for the most part, unknown.

It is the stuff of literature, film, art, and music – life turns on a dime. Mancy Massengill walks into a store and has the idea to start making photographs. Almost seventy years later, Maxine Payne, a photographer from Arkansas, reconnects with a family friend, Sondra Massengill, the daughter of Lance and Evelyn, and is invited to discover hundreds of photographs that she never knew existed. Those two events, not excluding everything that happened in between, have brought this project into being. Today, thanks to luck or providence, or both, we have been afforded the opportunity to see these photographs that would have otherwise been lost to the slow but inevitable passage of time.

The exhibition is accompanied by a publication of the same title, co-published by Dust-to-Digital and Institute 193.