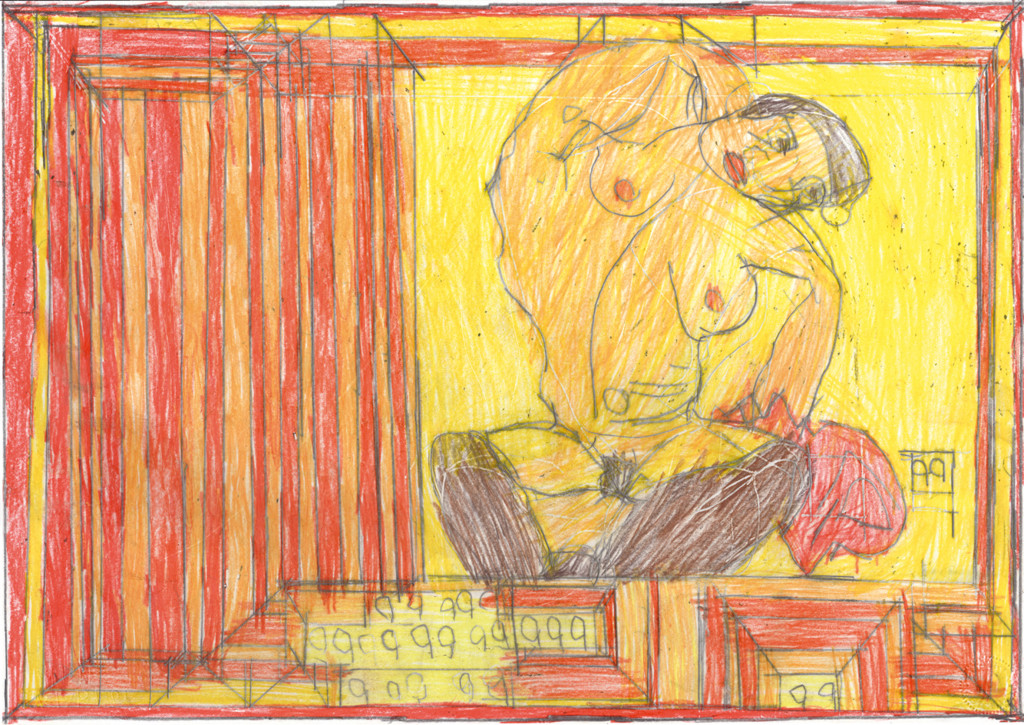 In December 2007, an Austrian gallerist walked into the Lebenshilfe Oberösterreich in Ried and presented Josef Hofer with a Christmas gift, a book of Egon Schiele’s works on paper titled Aquarelle und Zeichnungen. Hofer accepted the gift by throwing it onto the ground and walking away–-clearly displeased with the book’s contents. The center’s director, Elisabeth Telsnig, apologized to the gallerist and placed the book on a shelf. Weeks later, Telsnig discovered that Hofer, of his own volition, had taken the book from the shelf and was drawing directly from its pages, creating new versions of Schiele’s famous nudes, confined within his trademark orange and yellow frames.

Since 1997, drawing has consumed Hofer’s daily routine. He works constantly, drawing and re-drawing his subjects in pursuit of perfection, constantly evolving his bold and vital figures. In Austria, critics and fellow artists have long referred to Hofer’s work as schielesk, reminiscent of Schiele, but any formal similarities, before 2007, were born out of coincidence or perhaps some deeply embedded cultural aesthetic.

Hofer is deaf and does not speak. We will never know exactly how he felt about seeing Schiele’s work for the first time or why he has chosen to spend years incorporating these drawings into his own practice. It is clear, however, that the experience deeply affected him. On some level, we all seek to distinguish ourselves, but artists have a special attachment to the notion of originality. Hofer’s experience: an artist confronted by the similitude of another’s work is far from unique. His response, however, demonstrates the artistic courage he possesses and a driving desire to improve and evolve. 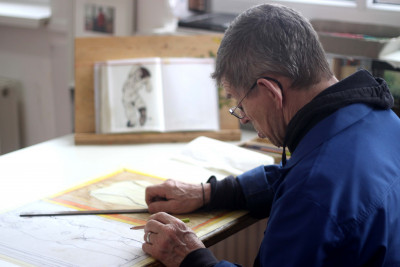 Josef Hofer, who has been a resident of an Austrian institution for more than 30 years, does not speak. He draws. Tirelessly. In the metaphoric mirror that he uses and reaches out to us, people attempt to flee from the straitjacket of the frame with eroticized and untamed grace. His works - to which Michel Thévoz has devoted several essays - depict a founding duality between body and psyche. Present in numerous museum collections, he is also part of great private collections: A. de Galbert (France), A. Shaker (Switzerland) and even in the collection of A. Rainer (Austria), who considers him “one of the greatest of the brut contemporary artists.” A significant number of his works was donated to the Centre Pompidou collection in 2021 while the gallery became the owner of his estate in 2022. 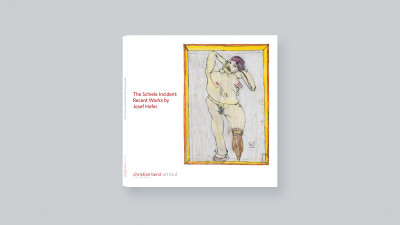